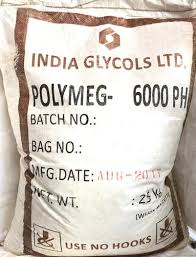 Polyethylene glycol, referred to as PEG, is used as an inactive ingredient in the pharmaceutical industry as a solvent, plasticizer, surfactant, ointments and suppository base, and tablet and capsule lubricant. ... PEG 3350 is a laxative available over-the-counter by the name of Miralax.

PEG 6000 has been used as the gate insulator in an electric double-layer transistor to induce superconductivity in an insulator.

PEG 6000 is also used as a polymer host for solid polymer electrolytes.

PEG-6000 acts as binder & dry lubricant due to its laminar structure and therefore can be used in the manufacture of pills and tablets for certain pharmacutical preparations . In rubber industry , PEG-6000 can be used as a mould release agent